Combat in Endless Space occurs when two fleets engage each other, using ship-based weapons and armor. Each engagement is divided into 5 phases.

Combat is initiated by an attack order or encountering an intercepting fleet. Each player is shown the ships in the enemy fleet before starting the fight, as well as pick battle actions for the battle.

Traditional or "Manual" combat, as described in-game, is described in this article. Combat may also be performed by the AI in an "Auto" engagement, however the exact details of this method are not known.

There are 5 phases in each battle. Of these phases, 1 and 5 simply display the condition of each fleet. Only the middle three phases (2, 3, 4) involve active weapons fire. A Battle Action(or card), may be used during each of these three phases.

Each weapon phase consists of four turns (or rounds), that determine when weapon salvos are fired. Each turn beams and kinetics fire one salvo, which hits on the same turn. Missiles fire once every three turns and hit two turns later. The sequence of phases has varying effects on weapon accuracy and thus damage output: for example missiles are most effective in the Long Range phase.

Fleet size and strength play a role in battles. They serve as the mounting platforms for all weapons and defences. Combat is won when all enemy ships are eliminated and their

Weapons in Endless Space are optimised at different ranges, as discussed in the following section. Fleet composition and enemy make up often attempt to counter the enemy's equipment.

Kinetics are short ranged projectile weapons. Their salvo is inacurrate and scattered at long range, but a full volley does high damage, akin to a shotgun. However, this accuracy-range limitation requires their use to be thought about and compensated for. They are best mounted on well armoured ships that can close to medium or short range to fire against unarmoured targets.

Kinetics damage as above scales primarily on projectile hits per salvo. Kinetic protection reduces damage by completely removing some of these hits, but cannot be relied upon. Even normally complete kinetic protection will not entirely remove all damage from large numbers of projectiles.

Beams are useful and versatile weapons, since their medium range works well in all phases of combat. Beams are considered a standard "go-to" weapon once they are unlocked and viable to produce, as both Kinetics and Missiles have performance issues at range. Beams have slightly higher Template:Cost costs per module, but work out at similar rates per ton and per damage.

Beam damage is countered by use of shield defensive modules, reducing damage by a set amount from the total damage they take from each of the four turns. Shields absorb about 90% of the average damage of an equal-tier beam.

Missiles are long-range weapons. They are fired in salvos as delayed damage, doing 1 large strike per round instead of constant damage. Missiles fire and detonate every three cycles (missiles are launched after the last salvo impacts). This is approximately twice in every range/round. Missiles are accurate and effective at long range and can eliminate some enemies before they can land a hit.

However, their delayed impact makes them very vulnerable to the interception. Flak Modules are very effective because they get to fire an intercepting projectile each round. As an example, a single rudimentary Flak module can eliminate three missiles in a phase. This is why missiles should not be used exclusively, the flak can easily reduce the damage potential of missiles.

Missiles are useful on offence and skirmishing because they hit very early and can eliminate ships in a single volley, before they have a chance to repair (although they will not fire if a retreat card is used). They are also very useful when your enemies have poor defences and are using kinetic ships, such as in the early game.

All missiles fired by a ship in a given phase are aimed at a single opponent's ship. With 90% accuracy at longe range, 70% at medium and 40% at melee.

Weapon accuracy during each phase[]

Base accuracy values for each phase are as follows:

Battle actions, popularly called "cards", can be played during phases 2, 3, and 4, and can contribute to a fleet's defense, attack, or other attributes. Each card is given a type, and can counter another card type (which is specified on the bottom of the card). If one card counters another card, it normally gains a bonus. A Hero can add cards to a fleet which cost dust to play. Note: a hero's card is also subjected to countering.

Cards are used to gain advantages and reduce weaknesses, and manipulate the battle in your favour, providing boosts to specific units. These are analogous to unit manipulation known as "micro" in real time strategy games, where specific units are moved in a certain fashion to gain an advantage. An example of this would be using Weapon Overclock to gain an advantage at close range, allowing you to kill more units in this one encounter.

Countering (or blocking) is a suggestion card that reduces the advantage of the card it blocks. Battle actions that perform blocking (and are not blocked themselves) gain a "Block" bonus, indicated in parentheses after the standard effects. Examples of situations in which blocking increases the advantage include:

The official notion of countering should not be taken as an absolute indication of how to select cards. It is possible for two cards to counter each other, while providing no "winner". While appropriate as a guide, selecting the most appropriate bonuses for the current situation (ie Chameleon while facing a strong missile enemy) should always be a priority. While eventually these bonuses will be shared between multiple cards as more unlock (and more "appropriate counters"), don't be afraid to trust your judgement and tactical needs over solely basing your cards on anticipating your enemy and blocking. 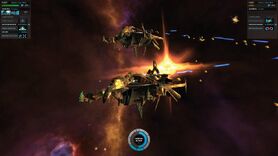 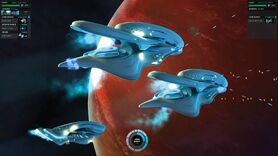 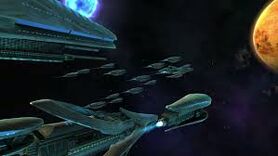 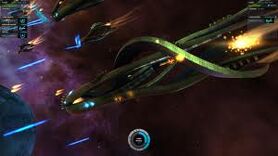 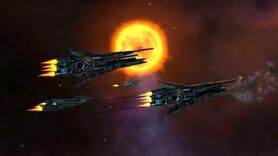 [1] - it appears that the missile formula used is wrong and Vanashe's roll method is more accurate.